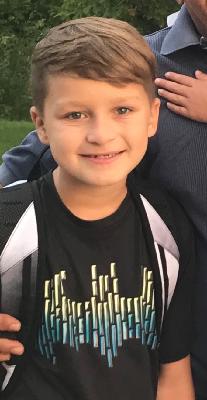 Joe was born June of 2008. Although pregnancy was normal, some complications arose during his delivery. Each time I had a contraction, his blood pressure dropped. And even though I had maintained throughout the entire pregnancy that I wanted to go VBAC, when the doctor came in and said we needed to do an emergency C-section, I never hesitated. As it was discovered during the surgery, the umbilical cord was over his shoulder causing the drop in blood pressure with each contraction. But that's not what caused his distress. In fact, as it turns out, it was the blessing in disguise.

As the surgery progressed, it was also discovered that Joe’s head was lodged in the birth canal which is what caused his head trauma. He was lodged in such a way that it took longer than expected to get him out causing him to go 3 minutes without oxygen and suffering a seizure. He was born and we didn’t even know it. They worked hard and got Joe breathing. Even with all that, it still isn’t the whole story.

Due to the head trauma, it was advised to try a new medical treatment called Cool Cap Treatment Therapy with induced hypothermia.  It was a relatively new process at that time. It was only available in 26 hospitals around the world and Joe would have been number 11 to receive it at Akron Children’s Hospital.  The theory was to treat the head trauma as you would any other bruise, with ice to control and lower the swelling. The therapy consisted of a cap that had cool water circulating through it to act as a cold compress for his ‘bruising’.  Swelling of the brain would most certainly have caused Cerebral Palsy with lifelong affects. As hard as it was learning the details of Joseph’s birth and now the potential life altering effects of it, we made the conscious decision to proceed with the treatment.

Each day the doctors would say, “we need to see ‘this or that’ out of Joe in order to see progress” and whatever it was they needed to see, day after day, he did it. He grew stronger every day and after just 10 days, he was on his way home.  One nurse of 27 years had even told us how just 2 years earlier we would have been getting prepped on what life would be like and medications needed for a child with Cerebral Palsy, she was definitely a believer in the new medical procedure after seeing the amazing results first hand.

Due to the seizure and head trauma he suffered at birth, he was required to visit with a neurologist for further evaluation in the following months of his birth.  Our neurologist was very impressed with Joe’s progress and believes that it was a result of the Cool Cap Treatment Therapy he received at birth.  So much so, that after 6 months, she said unless he had a seizure or something else that concerned me, she wouldn’t need to see him until he was 1 year old.  After his 1 year check-up, and without any incidents, she was comfortable enough to release him as a neurological patient.

Joseph is now 11 years old and just started 6th grade this fall.  He is a healthy young boy with dreams of becoming a chef, a scientist and of course his favorite superhero Batman, and he loves of sports.  We believe that because of the Walk for Babies and the donations it was able to raise just the year before, it contributed to the hospital having the means to provide such new medical procedures and for that, we are eternally grateful and will continue to support and raise funds for Akron Children’s NICU to give to others what they gave to us…a healthy child.

Your login information was incorrect. Please try again or click here to have your information emailed to you.