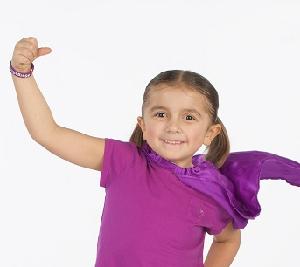 Why Saige is a #ACHero: Before her 5th birthday, Saige had already undergone 3 major heart surgeries to repair her heart defect. She’s grown up knowing she needs to take breaks to catch her breath, but it has never stopped her from doing the things she enjoys or from becoming an amazing young girl with a heart of gold.

When she’s not busy overcoming obstacles: Saige enjoys playing outside and with her Barbies or babies. She also loves to play hospital with her big sister, Adeline, where she helps babies feel better using IVs made of yarn and wearing her pint-sized scrubs and doctor’s jacket.

Fourteen hours after birth, Saige was transported to Akron Children’s NICU. Little did anyone know, but the physician on-call would become her family’s go-to source for her cardiac care and also Saige’s favorite doctor in the process.

“Her oxygen was dangerously low, and she had a heart murmur,” said Michael, Saige’s dad. “Saige was a full-term baby so she looked like a giant next to the NICU babies, but her size didn’t help her heart.”

Upon arrival, Dr. Patel performed an echocardiogram. He determined Saige had pulmonary atresia, a heart defect that impacts blood flow from the heart to the lungs.

Saige was also suffering from Wolff-Parkinson-White (WPW) syndrome, which caused episodes of rapid heartbeat. The WPW needed repaired before she could have her first open-heart surgery.

To fix the WPW, Dr. John Clark performed a cardiac ablation on Saige’s heart to destroy the area of tissue that was causing the abnormal heart rhythm. The surgery took nearly 3 hours.

“Saige’s heart was the size of a walnut and the ablation was as small as a pinhead, so to say the surgery was tedious is an understatement,” said Michael. “Dr. Clark is known worldwide for his work, and we were lucky to have him right here in Akron.”

At 15 days old, Saige was ready for bypass surgery on the right side of her heart to temporarily provide blood flow to her lungs until she was ready for more significant repairs.

“Our family believes in prayers, so we called on our own faith, friends and pastor, as well as the Palliative Care team to get us through,” said Michael. “The entire staff was always there for us…they were instrumental in helping us all feel better.”

The surgery was a success. Saige was able to go home but, 8 days later, her oxygen level dipped to 60 percent and she was turning blue. Saige was rushed to the PICU where she had another heart catheter and breathing tube placed. Nurse practitioner Amy found when Saige was feeding, she’d aspirate because milk was going into her lungs.

“We had to thicken her bottle and food for her first year and spent a lot of time with the feeding team,” said Jobeth, Saige’s mom. “The ICU staff and feeding team were fantastic with us.”

Saige’s next heart surgery was at 6 months old. It was another long surgery that would help blood flow directly to her lungs. Her oxygen level jumped to 80 percent afterward, so she no longer needed to be on oxygen.

“Her energy level went up significantly, but she’d still get winded. She didn’t give up, though, she was non-stop physically and became a chatter box,” said Jobeth. “She’s always been a talker…she does a lot of talking, but never any complaining.”

Saige kept growing and stayed right on track with her infant milestones.

At 4 and a half, Dr. Patel spoke with Saige and her family about her next big heart surgery. Afterward, he called to make sure she was feeling okay, just like he’d done many times before.

“Words can’t describe how wonderful our experience has been at Children’s. God put Dr. Patel on-call that first day because we needed him to care for Saige,” said Michael. “Saige loves Dr. Patel and feels safe with him and everyone at Akron Children’s. She’s never been afraid, which is a testament to how she’s treated.”

With her big surgeries behind her, Saige takes daily medications and checks in with Dr. Patel to manage her condition. Now, with even more pep in her step, Saige is getting ready for kindergarten and has no plans of slowing down.