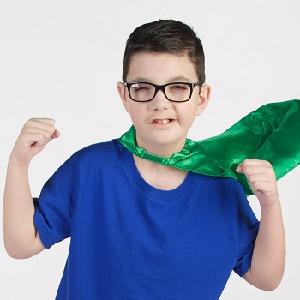 Diagnosis: Complications from Group B Streptococcus

Sidekicks: Allie, his dog and Thor, his therapy horse at Pegasus Farm.

Why Lucas is an #ACHero: Lucas entered this world a fighter, and after double-digit surgeries, lengthy hospital stays and grueling therapy sessions, he continues to push forward to be his best. Even when things aren’t easy, Lucas approaches the challenge with courage and a kind heart to get him through.

When he’s not busy overcoming obstacles: Lucas loves getting his hair cut, going to the library and church and playing outside, especially with his Challenger baseball team. He’s also very social and enjoys talking with friends.

Did you know fact: Lucas loves getting his hair cut and is a celebrity at his local salon. He knows all the stylists and gets candy each time he goes.

If you measured strength in smiles then Lucas Ransom would be one of the strongest people on the planet. His easy smile can turn even the worst day into a better one, but for a boy with complex health conditions, it isn’t always as easy as he makes it look.

“At 33 weeks, we were at our birthing class and had just learned about a stress test that I should take,” remembers Beth, Lucas’ mom. “I did the test and was admitted right away. They released me the next day but said if I didn’t feel him move, I should come back.”

Lucas arrived at 33 ½ weeks with a cleft palate, which was a surprise to his parents, however, the serious health conditions Lucas would soon face would be far more shocking.

Lucas spent a month in his birth hospital’s neonatal intensive care unit where his parents learned how to use his nasogastric feeding tube and doctors ran dozens of tests.

Six days after coming home, Lucas had an appointment with Dr. Ananth Murthy for his cleft palette, Dr. Patrick Riley Sr. for his muscle tone and the late Dr. Haynes Robinson for genetic testing. Lucas looked sick and after 2 appointments, was rushed to the ER.

“Lucas died in the elevator on his way to the PICU,” remembers Beth. “People swarmed around him and we stood there watching them perform CPR to bring him back. It was such a traumatic event…for the next 48 hours we didn’t know if he’d make it.”

Dr. Blaise Congeni diagnosed Lucas with a type of bacterial infection known as Group B strep (GBS), as well as meningitis, sepsis and hydrocephalus.

Lucas received strong antibiotics to help fight the infection and was placed in a medically-induced coma. He also underwent surgery to place a tracheostomy, feeding tube and shunt to sustain him. No one knew how the trauma would affect his brain. There was a chance he wouldn’t be able to speak, hear, see, walk or even breathe on his own. For nearly 3 months, Lucas fought for his life.

At Easter, Lucas opened his eyes. The Ransoms were finally able to hold their son for the first time since his ordeal began. Soon after, Lucas had emergency ventriculoperitoneal shunt surgery and another scary visit to the PICU before his 6-month birthday.

“Lucas’ care is a marathon, not a sprint,” said Beth. “I had to quit my job to stay home with him and needed home care to help manage it all. There were times we thought we’d lose our home, but thankfully and gratefully, the palliative care group provided us with financial and emotional guidance to get us through.”

“There is no logical reason why he’s done as well as he has… He’s medically fragile, but we don’t treat him that way,” said Beth. “Our goal is to make him as independent as possible so he can be his best.”

Lucas’ medical journey is life-long, but with the help of his care team at home, school and the hospital, Lucas battles on with his signature smile.

“Akron Children’s saved Lucas’ life. We wouldn’t be where we’re at now if it weren’t for the people who intersected our lives at the time they did,” said Beth. “The doctors, volunteers, nurses, they’re all part of his story. We don’t forget that and words can’t express how thankful we are.”