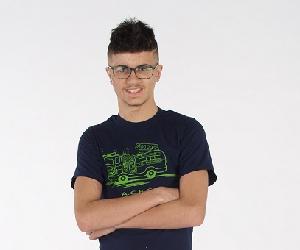 Superpower: Teleporting and invisibility. Having the very cool power to turn back, or go forward, in time. Once there, having the super sneaky power of spying on others or quickly disappearing.

Why Jayden is a #ACHero: Jayden was 9 when 24% of his body was covered in third-degree burns. Thanks to his undeniable strength and positive spirit, Jayden endured months of painful surgeries, dressing changes and therapies to heal his wounds and get back to playing sports and just being a kid.

Did you know fact: Jayden is good at sports and very funny! In soccer, he can score with either foot, but has a killer left shot. Once, on Mother’s Day, he kicked in a goal with his left foot from half field!

Aug. 1, 2012 started off like a typical summer day for Jayden but turned into one that left a lasting impression.

Jayden was playing near a small, outdoor fire when his friend threw gasoline on it. In less than a second, Jayden’s upper body was engulfed in flames.

“My husband called and said get to the house now. He didn’t say why, but I could tell it wasn’t good,” remembers Amber, Jayden’s mom. “When I arrived, Jayden had already changed his clothes. He wasn’t screaming or crying…We live close to the hospital, so I drove him to the ER myself.”

Akron Children’s ER staff swiftly moved Jayden to the Burn Center where they assessed his injuries. Twenty four percent of Jayden’s body was burned, affecting the right side of his face, neck, underarm and chest.

Two days later, Jayden had his first skin graft surgery, a process that takes healthy skin from another part of the body and surgically places it over the burn wound to help heal the area.

"He had a lot of skin grafts that failed due to infection, so they had to keep redoing them. It was awful, but he never complained,” said Amber.

In between surgeries, Jayden’s head, chest and arm were wrapped in bandages. Every other day, his dressings were changed, and each day he had painful, but necessary, therapy. Exercises kept his muscles and skin stretched out and increased flexibility in his neck, mouth, arm and chest.

“We immediately became friends with the nurses.…It’s a special breed of people who do what they do,” said Amber. “They were so amazing with him, with all of us.”

Jayden nearly lost his ear because of the damage from his burns and had lots of trouble with the burns on his neck. After several surgeries, his ear was doing better, but the skin on his neck was getting tight, making it difficult for him to pull his head up. Dr. Ananth Murthy placed a balloon-like device under Jayden’s skin to stretch it out so he could surgically manipulate the skin to reduce scarring and improve mobility in his neck.

In all, Jayden needed more than 25 surgeries to mend all of his wounds.

“The nurses worked with him every day and taught us how to help him,” said Amber. “They also understood he still needed to be a kid, so they got him a Nerf gun. He went around the floor shooting at staff, even at one of the doctors!”

The Burn Center was Jayden’s home for more than 4 months. He received ongoing support from his family, and found comfort and encouragement from visitors such as the Doggie Brigade, especially Rosie, Petie the Pony, volunteers, Santa and school friends.

During Jayden’s recovery, he did what was asked of him and kept his family’s spirits up with his wit and determination. He made friends with nurses, other patients and even strangers who noticed his room from outside the hospital.

“He put signs up in his window saying ‘Jayden’s here’… people started asking about his story,” said Amber. “He received hundreds of get well cards and even got the attention of local media.”

Today, Jayden is entering his junior year of high school, follows up with Dr. Murthy every 6 months and attends Burn Camp each summer. Jayden also became a spokesperson for the ACBC, which collects aluminum cans to help kids just like him.

“You would think he’d never want to set foot in the Burn Center again after all he’s been through, but any time we’re at the hospital he wants to stop in to say hello,” said Amber. “I think that’s proof of how wonderful those people are and how amazing Jayden is.”