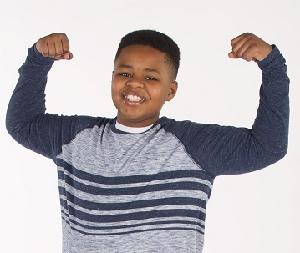 Superpower: Durability and kindness. The power to be kind-hearted, brave and able to withstand anything necessary in the face of a challenging situation.

Why Donovan is a #ACHero: At age 7, Donovan was diagnosed with a rare liver cancer and a scary prognosis. Rounds of chemotherapy and surgery tried to zap his spirit, but Donovan stayed strong and true to himself throughout treatment. Now in remission, Donovan continues to bring joy and kindness to others.

When he’s not busy overcoming obstacles: Donovan is a huge comic book fan and loves playing with his superhero action figures. He also enjoys cooking for his family and singing in his church choir.

Did you know fact: Donovan has hundreds of superhero action figures. He’s also a self-proclaimed encyclopedia of comic book characters. He knows all the DC Comics and Marvel Comics’ character names, powers and stories behind each one.

All great superheroes stand up for something – justice, truth, honor – so when Donovan or “Donny Man” was diagnosed with cancer, he fought back in the name of kindness.

“Kindness never left him, even in the midst of his worst days,” said Lisa, Donovan’s mom. “He left the hospital the same way he went into it…cancer didn’t change him.”

At 7, Donovan was hit in the stomach by a soccer ball and couldn’t quite shake the pain. His mom took him to the ER for evaluation. Still in pain a few weeks later, he went back for a CT scan that detected a tumor, unrelated to the soccer incident.

Oncologists diagnosed Donovan with a rare form of liver cancer that affects just 1% of children with cancer. It was aggressive, and in just 2 weeks, it went from a mass barely detectable on X-ray to one as big as a soccer ball. Doctors acted quickly and created a care plan.

“They did a great job of talking to Donovan, explaining things to him since he was the one going through it,” said Donovan’s dad, Kevin. “The only question he had was if he was going to lose his hair like Rocky did in the movie, Creed.”

Donovan’s treatment included multiple rounds of chemotherapy in the hopes of shrinking the tumor. Donovan, an avid comic book fan, had a master plan of his own.

“I named my tumor Darkseid from DC comics because he’s an evil villain,” said Donovan. “My med port was the Boom Tube and my chemo was Wonder Woman because she is the only one who can beat him up. Wonder Woman traveled through my Boom Tube to fight Darkseid until the doctors took him out.”

With a picture of Wonder Woman hanging on his chemotherapy bag, his favorite action hero went to work. Donovan would endure 4 rounds of chemotherapy; each session took 3 days and were administered every 3 weeks.

The first round didn’t go well. Donovan suffered every side effect possible – from hair loss, sores, and nausea to bleeding and intense pain. His organs - liver, lungs and kidneys - were negatively impacted, too. At one point, he was being fed through an IV. Doctors changed his chemotherapy medications to help. Donovan was tired and weak, but always brave and polite.

“I spent a lot of time in my room coloring when I wasn’t beating the nurses at Uno,” joked Donovan.

After months of chemotherapy, Darkseid only shrank by 7%. Doctors decided to surgically remove the tumor.

The 4-hour surgery was a success.

During Donovan’s stay, he made friends with other kids in his unit and talked with them about fighting cancer and how they’d get through it. Later that year, after he was discharged, Donny Man did another heroic act. He walked for his friends at a Relay for Life fundraiser. He also represented Akron Children’s in Washington, D.C. as part of Family Advocacy Day to talk to lawmakers about the difference pediatric care provided him.

“Along with Warren City Schools and our hometown, the staff was a constant source of support and care for us. From parking to food service and everyone in-between, they showed compassion we didn’t even know we needed,” said Kevin. “They were respectful to us and to Donovan. The fact that he survived and is thriving … no doubt, Akron Children’s was a huge part of that.”

Today, Donovan visits oncology twice a year for checkups, sees nephrology to monitor his kidneys and attends a survivorship program to learn about the late effects of chemotherapy.

Two years in remission, Donovan walks with purpose and kindness. With the support of his care team and his own will and imagination, Donny Man battled an evil villain and came out the other side victorious and, always, kind.