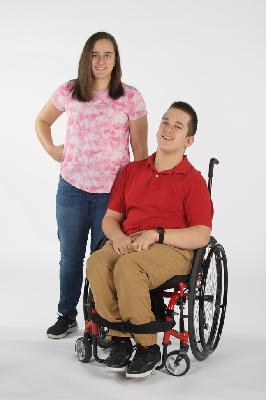 Superpower: Gift of gab. With an outgoing personality, Cory has never met a stranger. He talks to everyone, any chance he gets.

Sidekicks: His therapist at Akron Children’s, Kate Patton, his teacher Mr. Linder, his teammates, his mom and dad, brothers and twin sister.

Why Cory is a #ACHero: Born at 26 weeks and diagnosed with cerebral palsy, Cory has had challenges since day one but has always prevailed thanks to his strong will and support from his care team. Now in high school, he continues to set goals for himself and works hard every day to find new and better ways to accomplish them.

When he’s not busy overcoming obstacles: Cory is a huge sports fan. He knows college and professional players’ facts and stats for a variety of sports – hockey, football, baseball and basketball. He also enjoys playing on the Tallmadge Challenger baseball team, the Tallmadge wheelchair basketball team and is ball boy for the Tallmadge varsity football team.

Did you know fact: Cory likes to name his wheelchairs. His power chair’s name is Bryce and his manual chair is Tom.

Through strength, perseverance and good dose of charisma, Cory Michalec made a name for himself in the NICU that has stuck with him through therapy, school and on the sports field. Cory is not a quitter.

“My pregnancy was going smoothly until my 24-week ultrasound,” said Tiffany, Cory’s mom. “I was in preterm labor… about 2 weeks later the twins were born and immediately transported to Akron Children’s NICU.”

Cory weighed 2 pounds 2 ounces and was 13.5 inches long. Outwardly, he looked stronger than his twin sister, but testing came back that Cory had a brain bleed. On a scale of 1 to 4, with 4 being the worst, he was a 4.

“I kept thinking this really can’t be happening to him,” said Tiffany. “The doctors couldn’t predict how he’d do from one day to the next. Everything was just wait and see.”

Doctors diagnosed Cory with hydrocephalus, a brain condition that happens when cerebrospinal fluid can’t drain from the brain. The hope was Cory’s body could work the extra blood out of his system without medical intervention but, after a few setbacks, surgeons placed a shunt in Cory’s skull to help drain the fluid.

Cory graduated from the NICU on June 5, 2 days before his mom’s birthday.

“What a gift,” said Tiffany. “It was wonderful having our babies home, but we quickly realized we needed to get used to the 16 minute drive to the hospital because we were there - a lot.”

Cory had follow-up appointments at the NICU and ophthalmology. Soon after, he was diagnosed with cerebral palsy and began meeting with a team of specialists in physiatry, neurology, orthopedics, psychology and physical and occupational therapy.

Cory also had a hard time eating the first 2 years of life because of a terrible gag reflex. He worked with the speech and feeding clinic at the hospital and kept trying new foods at home, but nothing seemed to work.

“We were thinking he was going to need a g-tube,” remembers Tiffany. “But then, a switch flipped…he ate a Cheerio and it stayed down! It was amazing!”

At 3, Cory attended an integrated preschool where he began to blossom as a learner and a friend. He socialized with kids – with and without disabilities – and gained independence.

Cory kept up with his therapy, but as he got older, he wasn’t enjoying it as much.

“Cory saw his dad and brothers play sports or watch sports on TV all the time, so I thought why not use sports items at therapy,” said Tiffany. “Cory immediately took to it and took to sports in general.”

At 4, Cory started playing Challenger baseball. Although he was getting stronger, Cory struggled to keep up with his peers using his walker. By second grade, Cory moved to a wheelchair full-time, which offered him more mobility and energy to do the things he enjoyed.

“Allowing him to just use his wheelchair was a tough decision for us, but a great decision for Cory,” added Tiffany.

“I think it’s important for families with complex care babies to know their child is going to grow up and have a future,” said Tiffany. “There are so many uncertainties at every step of the way, you begin to think life will always be that way. But Cory and Katie are a great example of how things do slow down, you will find a balance and you can live your best life.”

Superpower: Animal whisperer. Having the power to heal, support and talk with any animal.

Why Katie is a #ACHero: Born premature, tiny Katie had to work hard to gain strength, develop and overcome obstacles from the start. With her strong will and determination, Katie has achieved every milestone along the way and has grown to be a very kind and capable young woman.

When she’s not busy overcoming obstacles: Katie is a loyal friend to others, especially her twin, Cory. She enjoys playing basketball and golf, as well as keeping things extremely organized at school and at home. An avid animal lover, Katie also loves to pet sit for her neighbors and friends.

Did you know fact: Katie is an expert-level Lego builder. She’s built more than 50 Lego sets, including master buildings, trains and carousels.

Tiny twin Katie Michalec was born at 26 weeks, 2 days and faced a mountain of medical uncertainties. For nearly 3 months, Katie overcame incredible odds to graduate from the NICU, but her medical journey wasn’t over.

“I knew I was a high-risk pregnancy because I was carrying twins, but I felt great. When the doctor told me at 24 weeks I was in preterm labor, I couldn’t believe it,” said Tiffany. “When the twins were born, they were so tiny … I was so scared for them.”

Katie weighed in at just 1 pound 12 ounces and was 13 inches long.

“Katie looked so, so tiny,” said Tiffany. “I was worried about both of them, but outwardly she looked much smaller than Cory so I thought she would struggle the most. At the time, I didn’t understand what our journey was going to look like... The only thing I knew was we were where they needed to be.”

At Akron Children’s NICU, doctors intubated Katie who was still too fragile to open her own eyes. Katie was diagnosed with bronchopulmonary dysplasia and immediately hooked up to a ventilator to help her breathe while her lungs continued to develop.

“As she got stronger, they’d take her off the ventilator to breathe on her own, but just as that was going well, she seemed to catch every infection possible,” said Tiffany. “When people tell you having a baby in the NICU is a roller coaster ride, they aren’t kidding.”

Thankfully, Katie began gaining weight, breathing and fighting off infections on her own. On April 21, a couple weeks before her actual due date, Katie finally came home.

Still on oxygen and a monitor to watch her vitals at home, Katie had a list of follow-up appointments to keep in the NICU and with specialists - pulmonology for her lungs, urology for her kidney stones and ophthalmology for her eyes.

Just before her first birthday, Katie had a seizure. Two weeks later, she had another and more came over the next 6 months.

“Nobody could pinpoint why she was having them. We had test after test run, but no firm diagnosis,” said Tiffany. “A couple years later neurology diagnosed her with febrile seizures, which they said she’d out grow.”

The seizures were hard convulsions and caused changes to her personality and loss of memory.

“At Children’s, they understand how medical complexities work and how kids work,” said Tiffany. “We never wanted to hold Katie back from trying or doing something that interested her. If the doctor didn’t say no then we didn’t either.”

Katie also started integrated preschool, which included peers with and without disabilities. Katie had to leave her twin brother’s side a few hours each week and make new friends, which was hard for the otherwise shy girl.

“I was always worried she’d have a seizure at school but, thankfully, she only had them when she was with me…divine intervention,” said Tiffany. “It took until she was in 5th grade for the seizures to stop.”

Being premature also put Katie at increased risk for having some level of learning disability or developmental, visual or hearing impairments. Katie suffered some hearing loss at birth, but nothing that has negatively impacted her ability to learn or socialize.

Today, Katie’s medical journey has slowed down, but her determination hasn’t. She still works hard to accomplish goals in the classroom and follows her coaches’ instruction as an athlete on the basketball court and golf course.

“We are so proud of everything Katie and Cory have accomplished in their 15 years,” said Tiffany. “We’re even more proud to be their parents!”