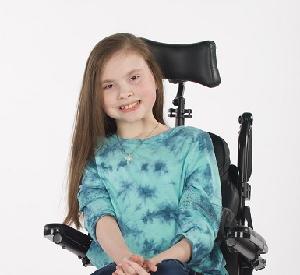 Superpower: Infectious smile. Madelyne can bring even the toughest person to his knees with her warm-hearted smile.

Sidekicks: All of Madelyne’s doctors, her mom, dad, brother, Brendan, and sister, Lauren.

Why Madelyne is an #ACHero: With more than 26 different diagnoses, Madelyne works hard every day to be her best. Through hospital stays, surgeries, medications and therapies, Madelyne is always pushing forward and always, always smiling.

When she’s not busy overcoming obstacles: Madelyne loves to swim. She also enjoys making slime and listening to music, especially Michael Jackson. Her newest joy is being an aunt to her niece, Nadia.

Did you know fact: Madelyne’s Make a Wish trip took her to Florida where she got to swim with dolphins in Discovery Cove. Additionally, Madelyne’s caregivers at Akron Children’s were so inspired by her courage with cerebral palsy, they formed “Madelyne’s Team” at the Cleveland Triathlon in 2013. As part of the team, Madelyne pushed herself out of her wheelchair to cross the finish line on her own 2 feet, with the rest of her team.

Madelyne has more than 26 different medical diagnoses yet the first person she worries about is her mom.

“She’s always concerned about me or others,” said Wendy, Madelyne’s mom. “She never thinks of herself first. She’s so caring and just loves to make others happy.”

Madelyne’s lungs were especially fragile, needing the assistance of breathing machines and extra oxygen. Once home, Madelyne continued to have trouble with her lungs. Multiple infections and trips to the hospital eventually gave way to one of her first diagnoses, chronic lung disease.

As Madelyne grew, she struggled to meet infant milestone and seemed physically weak. Her breathing was still a challenge, and lung infections kept occurring. Madelyne was also having muscle spasticity issues. The combination of symptoms and further testing brought another diagnosis at 18 months, cerebral palsy.

“We were always in and out of the hospital for something,” said Wendy. “Her lungs have always been a challenge…and something that still brings us to Children’s to this day.”

Madelyne was also born with congenital cystic adenomatoid malformation, a benign lung lesion that continued to grow after birth. As a result, she needed a lobectomy at age 2. The hope was that by removing the damaged lobe in her lung, other parts of her lungs would expand, making it easier for her to breathe.

Trips to the hospital became the norm for Madelyne. By 5, she was working with teams of caregivers in pulmonary, gastroenterology, rehabilitation services, NeuroDevelopmental Science Center, orthopedics, spasticity clinic and neuromuscular clinic.

By age 9, Madelyne had been hospitalized more than 30 times, primarily for issues related to cerebral palsy and her chronic lung disease. She also had a number of surgeries to help with her conditions, including hip osteotomy, muscle lengthening, tonsillectomy, adenoidectomy and others.

CP causes severe spasticity in her legs, making it difficult to walk, so she uses a wheelchair. To decrease the pain and spasticity in her muscles, she receives onabotulinumtoxinA (Botox) injections in both legs every 3 months and takes daily medication delivered through a pump to the fluid around her spinal cord.

“We’ve also found swimming helps relax her muscles and gives her a sense of freedom she doesn’t get on land. She loves it,” added Wendy.

In 2016, Madelyne got the flu, which led to double pneumonia, a MRSA staph infection, septic shock and a 20-day hospital stay. This past Christmas, Madelyne got pneumonia and RSV, which caused another trip to the PICU when she became unresponsive.

“I’m thankful for Akron Children’s and all the times they’ve been there when Maddie has needed it...it’s unfortunate, though, that she doesn’t know a body without pain,” said Wendy. “When I tell her we’re going to Children’s, she’s never afraid to go. In fact, she usually doesn’t want to come back home when it’s time because they take such good care of her, too good!”

Cognitively, Madelyne is well spoken and smart. In fact, she went to Capitol Hill and spoke to state representatives during Family Advocacy Day. She’s a good student, holding a 3.5 GPA, and is excited to start high school. Madelyne also works one-on-one with her school nurse who helps with her medical care needs, so Madelyne can focus more of her time on academics and friends.

“Madelyne’s positive attitude helps her overcome daily health challenges,” said Wendy. “‘I can try’ is always her motto. She works hard at everything she does, yet she always shows kindness to others and is quick with a smile.”