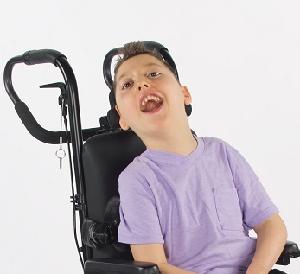 Superpower: Contagious smile. He can brighten anyone’s day with his awesome smile.

Why Kyle is a #ACHero: Kyle’s complex care has required countless hospital stays, surgeries, breathing tubes and therapies. While his care can be challenging, Kyle always tries his best and reassures others with his beautiful smile.

When he’s not busy overcoming obstacles: Kyle enjoys being a part of Dance Unlimited. He also loves swimming, music and being outside.

Did you know fact: Kyle can swim independently with a special flotation device. He’s also a big fan of watching fish and sharks swim, so as part of his Make a Wish, Kyle and his family took a trip to the Georgia Aquarium!

Maybe it’s the ball machine or the Doggie Brigade or his great nurses, but for Kyle, it’s all part of the royal treatment he gets as a patient at Akron Children’s, or as his mom calls it, “Akron Disney.”

“Every time I tell him we’re going to Children’s he squeals with excitement,” said Jenny. “I think it’s because everyone is so nice to him. He gets stickers and stuffed animals and loves the ball machine and the dogs. He doesn’t realize he’s at a hospital to see the doctor. He just knows when he’s there he gets to see friends.”

For Kyle, Akron Children’s has been a part of his life since he was a baby. At birth, Kyle appeared to be healthy – 10 fingers, 10 toes – but by 6 months, he wasn’t achieving all his infant milestones. After blood tests and several visits with developmental pediatrics, doctors recommended genetic testing to determine what was causing Kyle’s delays.

“At first, he was presenting like he had cerebral palsy, but because he didn’t have brain damage, doctors kept probing and did genetic testing,” said Jenny.

Kyle’s brain MRI showed a lack of myelin, the tissue that acts as an insulator around nerve fibers in the brain and spinal cord. This, combined with other symptoms, suggested he had a rare genetic mutation, Leukodystrophy hypomyelinating 6. The neurological disorder slows down or blocks messages between the brain and the rest of the body, resulting in problems with hearing, vision, speech and movement.

As Kyle grew, it became more apparent he had difficulty with muscle tone, spasticity, speech, body movement and eyesight. His care team began therapies right away but because his disease is regressive, he quit progressing after a few years.

“Because Kyle is non-verbal, we have to go through every body part to ask what’s hurting him,” said Jenny. “While physically he’s limited, cognitively he’s very well aware. He knows what’s going on.”

When Kyle’s therapies and medications didn’t offer enough relief, he’d undergo surgeries such as a inserting a feeding tube for nutrition, repairing the eye muscle to correct muscle imbalance, placing rods for scoliosis and orthopedic surgery to support his hips. While Kyle’s care is ongoing, so is his warm, reassuring smile.

“Kyle knows everyone is helping him be his best,” said Jenny. “He’s always smiling, even on really bad days.”

Last year, one of Kyle’s bad days turned into multiple trips to Akron Children’s for a number of issues over a 6-month period. And, problems kept persisting. At home, Kyle began aspirating and struggling to breathe. He was life-flighted via AirBear®back to Akron Children’s where doctor’s discovered his lung had collapsed.

Kyle’s care can be a lot to manage, so the hospital’s palliative care team oversees his care and helps his family navigate the physical, emotional and financial challenges that can come with complex care.

Today, Kyle takes daily medications and has regular visits with vision and Dr. Micah Baird to monitor his condition. He enjoys going to school, being with friends and attending his weekly dance lesson with Dance Unlimited.

“Kyle loves being around kids, especially typical peers. He laughs and gets to be a kid,” said Jenny. “Even therapy isn’t therapy at Children’s; he gets to dance and socialize with Dance Unlimited, and it makes him feel special. We call the hospital ‘Akron Disney’ because he loves it there.”